Can you patent… a new ball game?
An IP look into Spikeball 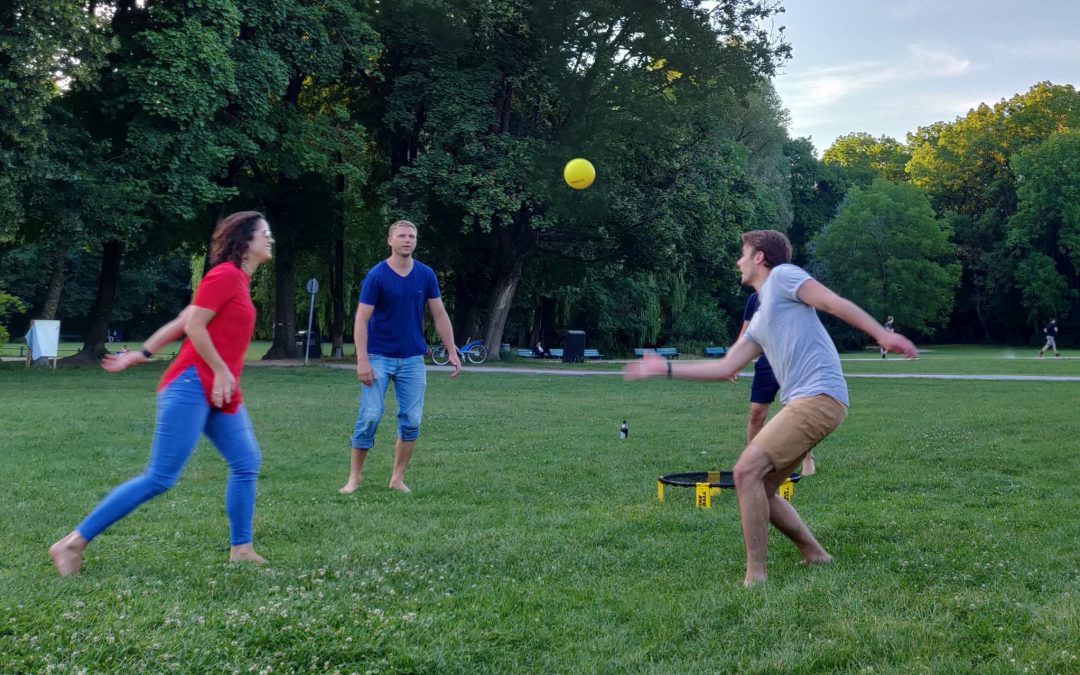 For fans of professional sports, it is common to hear the question “are you watching the game tonight?”. The “game” generally refers to a type of ball game. Depending on your cultural background or geographic location, this can refer to quite different things. In North America, people may interpret it to mean American football, baseball or perhaps basketball. In Europe, it may be associated with football (aka soccer) and in Australia, Aussie rules football or cricket may be assumed.

With so many well-established ball games available, inventing a new ball game would appear quite difficult. A question is if a new ball game were to be created, would it be possible to patent such a game (or parts of the game)?

This question leads us to Spikeball, which (spoiler) was patented at the United States Patent and Trademark Office. The title of the patent was aptly titled Ball Game. However, it was patented under some surprising circumstances. We provide a brief analysis on Spikeball.

Spikeball is a game involving two teams, each typically comprising two players, a small netted trampoline and a ball. Similar to the keep-up rally playstyle of volleyball, each team takes turns setting up the ball to be “spiked” to the other team. Rather than over a net however, the ball is hit onto the netted trampoline in which the turn then switches over for the other team to play. Additionally, teams are not separated on different sides of the playing area but players can be positioned anywhere around the trampoline. A team scores a point when the ball touches the ground or hits an illegal part of the trampoline on the opposing team’s turn. There are some additional rules for fair play.

The History and Revival

You may have seen this game played at your local park or beach (at least when we were allowed to play outside during pre-Covid-19 times!). It is a game which has steadily risen in popularity over the last 5 years or so, especially in North America. See the worldwide interest reflected in search history for the term Spikeball since January 2013 as provided by GoogleTrends. Not surprisingly, interest is highest in the summer months of June and July

I was introduced to the game by fellow patent attorney Jack last summer (Spikeball Wednesdays!). The game may look a bit unassuming but it only takes a few rallies before it really pulls you in and wanting to play every trip to the park.

Many people who come across it for the first time, including myself, assume it is a recently created game. It certainly does not resemble the traditional sports games you often see at recreational parks or on television.

As it turns out, the original game was created 30 years ago in 1989 by game designer and Spikeball inventor, Jeff Knurek. The game was originally bought and manufactured by the Japanese company Tomy Games. I mention originally, because there is now a new Spikeball game set.

Although it experienced mild success in the early 1990s, it wasn’t until 2008 when Chris Ruder, the CEO of the current manufacturer of the game Spikeball, Inc., and his team decided to revive the game that the game started to become mainstream. It received a spike in popularity (pun intended) when it was featured on the popular reality television show Shark Tank in 2015. Although a deal was never successfully closed with the investor from the show, the exposure was enough to peak interests and help propel the game into mainstream culture.

Although I have often seen black and yellow playsets of Spikeball being used in parks, I have also seen different versions of the game in various colours. A quick look on Amazon confirmed that there are some very similar games under different names.

The obvious similarities and open availability of such products was a bit shocking. Surely there is some IP protection for Spikeball, right?

To patent or not to patent

I was fortunate to have a chance to hear from the inventor Mr. Knurek himself who gave me insight into the situation at the time. As it turns out, the original game was never patented by Tomy Games who bought the idea from the toy invention studio Mr. Knurek worked for. With no patent in place, third parties are able to freely manufacture and sell similar versions of the game.

It may be easy to question the decision not to file for a patent in hindsight. However, the situation is never that simple and there may be a number of reasons why a patent application was not filed at the time. It is often a difficult decision for any investor/manufacturer to make.

Given that the cost of obtaining a patent is not considered cheap, it is also often a financial burden to obtain and maintain a patent. Additionally, the USPTO reports that in 1995, the number of patents granted in the category of “Games Using Tangible Projectile” was only in the order of a couple hundred and likely would have been even lower in 1989. IP protection have certainly become a more prominent topic in the last decade. It is not difficult to fathom why it may not have been advised to obtain a patent at the time.

For Tomy Games, the company had been consistently filing patent applications in the U.S. at that time, although the numbers are also quite low. During the time of late 80s, early 90s, the online patent search service Espacenet shows the company as having around ten US publications per year. Given their wide-ranging portfolio of products, only a small number are deemed important enough to warrant patent protection.

In any event, the original Spikeball game set was manufactured and sold to the public without first obtaining patent protection. This partially explains why so many similar products are available.

One might think that the opportunity to obtain a patent is gone. The game and the equipment had been manufactured and sold since 1989 and thus made available to the public.

Undeterred by the existence of the previous Spikeball product, Spikeball, Inc. filed for a patent at the USPTO in March of 2013, which was subsequently granted as United States Patent 8,807,568 in 2014.

It may come as a bit of a surprise that a patent was granted for a game released 25 years earlier. The new product does bear more than a few similarities to the original. Take a moment to compare the patent drawing on the left with the product sold in 1989 on the right. Looks can be deceiving, however, and any experienced patent attorney will tell you that even small differences can have a big impact in distinguishing an invention from the prior art.

Interestingly enough, the application proceeded straight to grant without any objections from the U.S. patent office. Notably, the examiner only cited patent publications and seemingly was not aware of the original Spikeball game. This is somewhat understandable as the description never mentions the term “Spikeball” or even references the fact that the game already existed (although the assignee name “Kankakee Spikeball, Inc.” provides a bit of a hint). The background of the invention refers to other games/sports which are fairly irrelevant to the patent application. However, based on a quick online search, articles about Spikeball as well as the revived product were available prior to the filing date in 2013.

Spikeball, Inc. may well have drafted their application so as to include various features and modifications which are not included in the original Spikeball game. It may even have been to such an extent that the Examiner was aware of the original game but did not consider it as relevant to the invention as the documents which were cited. For patent applicants, it is not uncommon practice to improve and refine existing inventions in a new application to obtain further patent protection. The same approach can be taken by third parties to successfully obtain a patent, as long as the changes are deemed to be new and inventive.

So perhaps the allowance of the application was a result of an oversight of the existence of the original product. Or perhaps there are differences in the construction and/or improvements in the game that are considered inventive over the original product. However, it is difficult to judge the extent of these differences without having the physical product or the instruction manual of the original Spikeball game in hand. It would certainly be interesting to see if the USPTO or another patent office would have come to a different conclusion if the old Spikeball game was taken into account.

So to answer the question in the title again, yes it is possible to obtain a patent for a new ball game! More specifically, the game set is patentable, rather than the rules and method of playing the game. This is not too surprising, but the circumstances for the Spikeball patent is an interesting one and there are more interesting takeaways to this story than the patentability of the game itself.

What can we learn?

What is old may become new again. Not only the immediate benefits of a new invention should be considered but some thought should be given towards the future. Nobody can reliably predict the future, especially when it relates to trends of mainstream culture. However, precautionary measures can be taken to protect yourself from third parties benefiting from your ideas. If no protection is obtained, then another party is free to use the products. With certain modifications, a third party may also obtain a patent for a similar product!

Naturally, not every product needs patent protection, and even when suitable, it is conditional on the situation of the inventor/manufacturer. However, the Spikeball situation serves as a cautionary tale to not only make decisions for the present but to consider the developments that may arise in the future.

So Spikeball the game is patentable, but you may wonder: it seems more of a sport than a game set. This is an interesting point and the distinction does have consequences in the IP field, particularly when it comes to trademarks, but that is a discussion for another time.