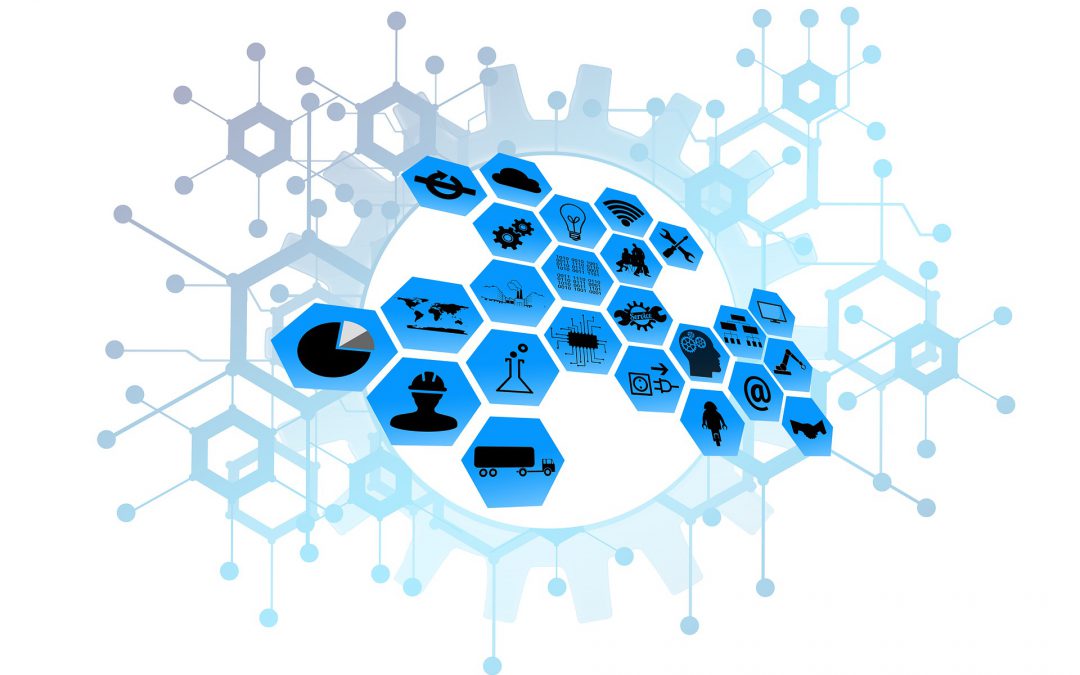 Blockchain has aggressively taken the centerstage of the fourth industrial revolution and is considered to be the driving force of the so-called web 3.0. Although blockchain’s claim to fame stems from its role as technology underlying the cryptocurrency Bitcoin, its use is not limited to the financial sector. For example, blockchain has applications in the industrial, healthcare, legal, and accounting sectors, as well as in political and administrative systems, such as in providing the underlying technology of voting platforms. The potential of this technology has not gone unnoticed by leading tech companies and financial institutions, or by many start-ups and SMEs. For instance, in the last two years, investment in blockchain has grown by more than 280%: 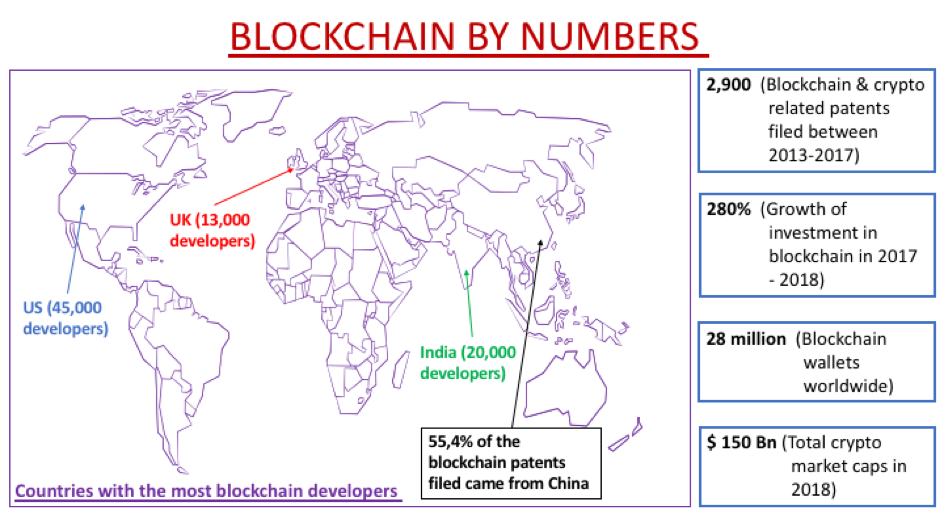 Thanks to the flourishing of cryptocurrencies, blockchain is now mainstream and ‘blockchain fever’ is rapidly spreading—including into IP world, in which blockchain is expected to influence how patent information will be made available to the public, how patents will be (cross-)licensed and how copyright will be protected and counterfeiting stopped. In addition, starting in 2015, the IP sector has witnessed a steep increase in the number of patent applications for blockchain-related invention.Blockchain-related inventions can relate to the core of the blockchain technology or to blockchain applications: 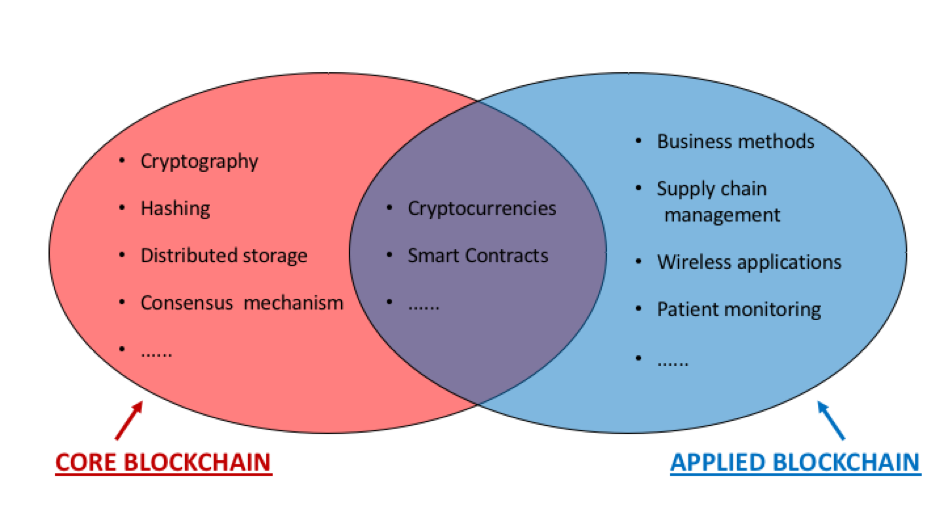 In December 2018, the European Patent Office (EPO), following its growing interest in the IP aspects of the fourth industrial revolution, held a conference entitled “Patenting Blockchain”. The EPO aimed at presenting, for example, the blockchain-related examination practices of the EPO but also of the Chinese (CNIPA) and the Japanese (JPO) Patent Offices.

The latest version of the EPO’s Guidelines for Examination provides an explicit definition of computer implemented inventions. These are inventions involving “the use of a computer, computer network or other programmable apparatus, where one or more features are realized wholly or partly by means of a computer program”.

Blockchain-related inventions are a multi-disciplinary technology involving, for example, computing (racks and grids), networking (P2P, cloud, routing, broadcast) and programming (S/W implementations, smart contracts), so they are bona fide examples of computer implemented inventions according to the EPO’s definition. But this technology is much more than its specific computer implementation and relates also to databases (data structures, synchronisation), security (cryptography, preventing tampering), mathematics (hashing, crypto puzzle), artificial intelligence and business methods (payments, transactions, supply chain management, business models in energy). The latest version of the Guidelines for Examination in the EPO deals exhaustively with each of these aspects: 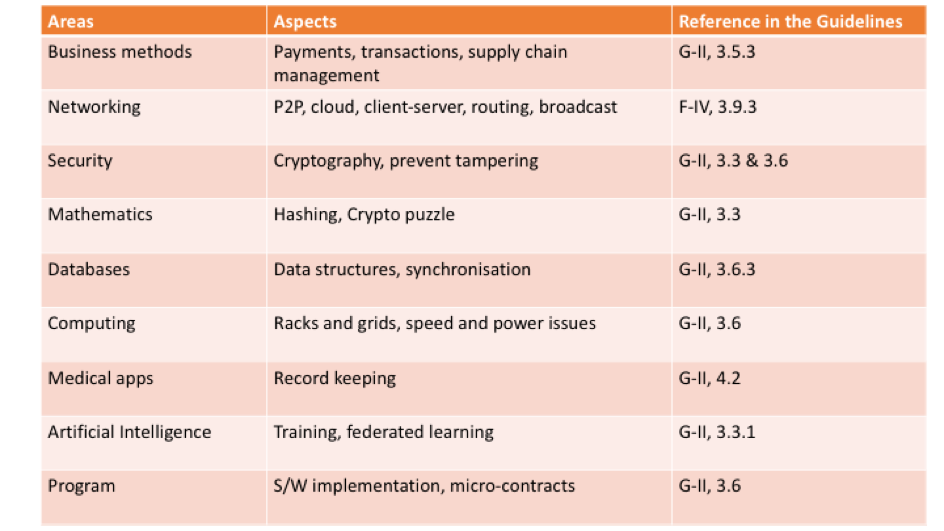 Consequently, the assessment of the patentability of blockchain-related inventions sits comfortably within well-established and clear EPO examination practice. It should come as no surprise, therefore, that despite the EPO receives only one eighth of all blockchain-related international applicatios, roughly one third of said applications asks the EPO to prepare the International search report: 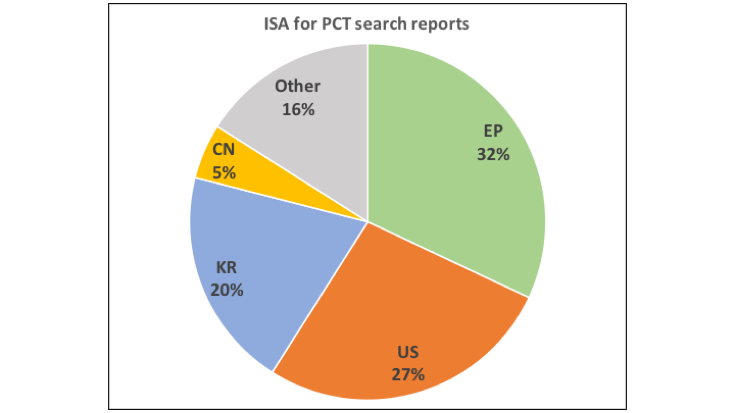 As mentioned, blockchain-related inventions may include both technical features (e.g. related to computing or networking) and non-technical features (e.g. related to mathematical or business methods). According to EPO examination practice, such mixed-type inventions are patentable if they overcome the two key hurdles (see also our article on patenting artificial intelligence):

The EPO has a well-established procedure, the so-called problem-solution approach, for assessing whether an invention overcomes the second hurdle. A detailed discussion of this approach can be found in section G-VII, 5 of the EPO’s Guidelines for Examination. In particular, section G-VII, 5.4 describes how the problem-solution approach is carried out when the invention comprises both technical and non-technical features, often the case with computer-implemented inventions.

With more than 2000 blockchain applications received, the CNIPA is currently the world’s leading patent office in the number of patent applications related to this technology. CNIPA practice when dealing with blockchain-related inventions adheres to current Chinese examination practice for computer implemented inventions.

In China, patents may be granted for subject matter that comprises an aggregation of technical means solving a technical problem. In order to be patentable, the invention and the patent application disclosing it have to fulfil the usual requirements concerning novelty, non-obviousness, clarity and enablement.

According to Article 25 of the Chinese Patent Law, rules and methods for mental activities are excluded for patentability but, notably, this does not exclude from patentabilitya blockchain-related algorithm implemented in a device. However, care should be taken not to run foul of Article 5.1 of the Chinese legislation, which excludes from patentability inventions contrary to law or social morality, or detrimental to the public interest. The comparable provisions of the EPO framework would rarely lead to the refusal of a European patent application, but several Chinese applications have been refused under Article 5.1. For example, a claim directed to a method for clearing (or ‘laundering’) virtual money is likely considered to be detrimental to the public interest and would thus be refused under Article 5.1.

The Japanese legislation is in general lenient when it comes to inventions related to business methods or computer programs. Notably, the Japanese Patent Act treats computer programs as products that are not excluded from patentability-eleigibilty. Moreover, in the last decade, the Japanese allowance rate for business-related inventions has exceeded 50% and is steadily increasing. Blockchain-related inventions, even those related to business applications, are thus likely to be considered patent-eligible by the JPO and may be more easily granted in Japan than in other jurisdictions.

In order to be granted, blockchain-related patent applications filed at the JPO have to overcome two hurdles, which, in principle, are similar to the ones considered in the EPO examination practice.

The first hurdle (eligibility) is relatively easy to overcome by appropriate claim formulation. For example, claims directed to blockchain-related inventions should be formulated to ensure that any data processing is based on technical properties.The second hurdle (inventive step) is, in general, less severe than its European counterpart. Indeed, contrary to EPO practice, the JPO considers both technical and its non-technical features when assessing the inventiveness of blockchain-related inventions.

This publication gives a general overview of the issues related to the patenting of blockchain-related inventions at the EPO. If you would like more information, please contact us at the following e-mail address: office@fleuchaus.com . We would be glad to put our experience and expertise in the field of computer implemented inventions at your disposal and provide you with advice tailored to your business needs.